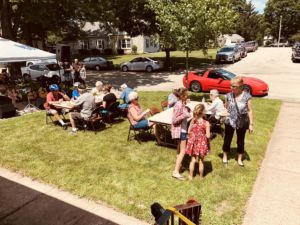 It was the culmination of months of hard, behind-the-scenes work for the board and volunteers, who spruced up the new location, with the help of a $6,400 grant from Home Depot.

On Sunday, about four dozen community members toured the home, which is located in a quiet and well-kept neighborhood, not far from the library.

Neal Jarnagin, the executive director of the shelter and the director of Bremer County Veterans Affairs, who was recognized Thursday by the Iowa Gov. Kim Reynolds as one of the recipients of the Governor’s Volunteer Awards, welcomed the guests with an impromptu speech.

Emphasizing that the shelter works at no charge to veterans, unlike similar establishments in the area, Jarnagin praised the efforts of Bob and Sally O’Hare, as well as Bob and Jean Sable, who donated time and effort to prepare the home. 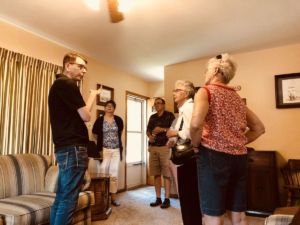 He noted the handicap accessible bathroom on the first floor, which would allow the shelter to extend its services to veterans in wheelchairs.

“That is not a bathroom, not in my eyes, that bathroom is everything,” Jarnagin said. “We can now accept individuals who have wheelchair access that have nowhere else to go. The last shelter, we couldn’t do that, we had stairs. In the coming weeks and months, you will see a wheelchair ramp in the back. You will be able to have access from the porch into the home. All of the doors on the first floor have been expanded to allow wheelchairs to go through.”

The celebration kicked off with a ribbon cutting by Jean Sable, who was assisted by Sally O’Hare and her husband, Bob. 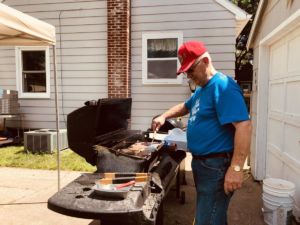 Board members Brittany Suchanek and Jacob Farran prepared the table decorations. Board member Sara Stephens was in her element, helping everywhere she was needed. 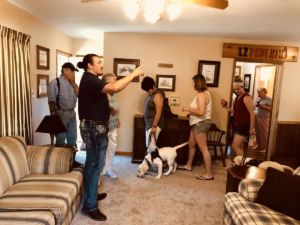 After the meal, board members alternated to give guests tours of the house. The security system, which involves inside and outside cameras, elicited a lot of questions.

While the celebration was in full force, Bob Sable, who was believed to be in Canada, showed up fresh from a fishing trip.

“I came straight from Canada,” Sable, a Vietnam veteran, said. “I felt I should be here, I didn’t have time to rest or else I would have missed the event.”

Most guests were inquisitive about how the operation works and how many veterans have been served so far.

Jarnagin said about 40 families have benefitted from the shelter since its inception.

His proverbial patience came in handy, as he took the time to answer every single question to the asker’s satisfaction no matter how many times the questions were repeated.

Macie Johnson, 11, the granddaughter of Vietnam veteran Brent Steere, and daughter of Iraq and Afghanistan veteran Chad Johnson, came to the shelter with her cousin, Haven, 8, and her grandparents, Brent and Jerelyn.

The two cousins like the house, but said they found the beds upstairs a bit too hard.

“Because my grandpa and daddy protected my country and my freedom,” she said. “We should give back to the homeless veterans because they deserve it, and because they fought four our country.”

One of the guests, Dita Boorom, whose late husband, Gary, served on the council for 18 years, said she is pleased to see how tidy the new shelter house is and that it is located in the midst of a beautiful neighborhood.

“We should treat our veterans well,” she said. “They have done so much for us all.”