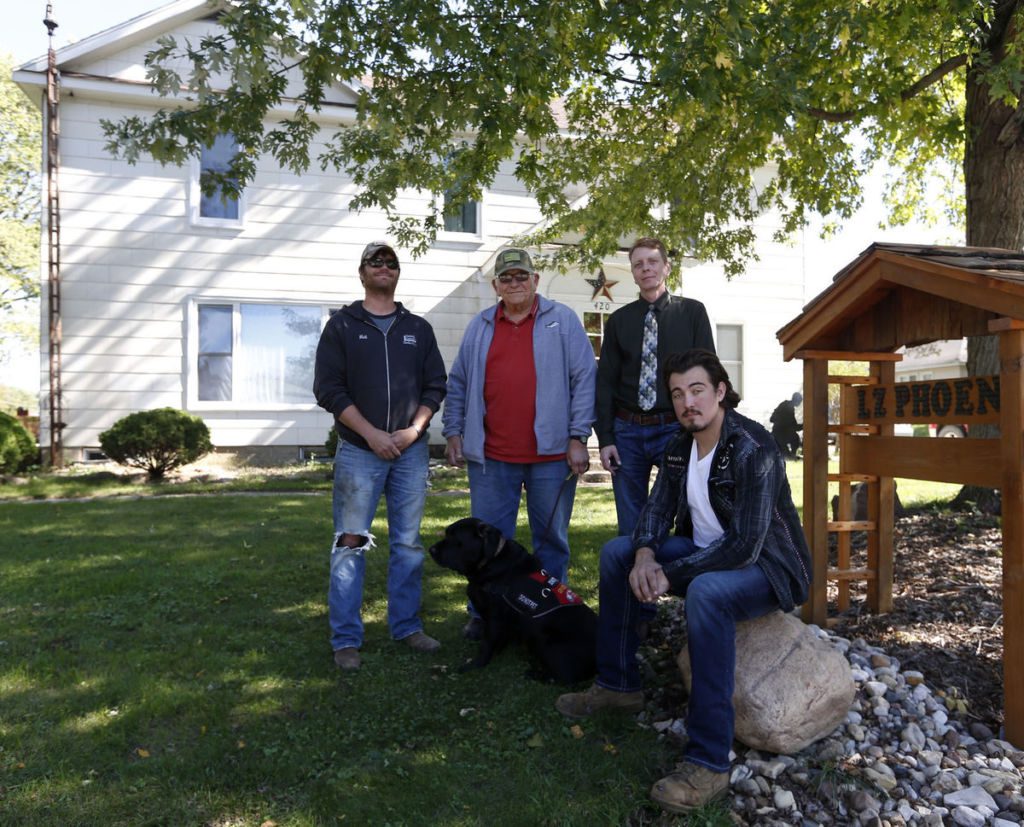 From left, Matt Haugan, Bob Sable, Neal Jarnagin and Jacob Farran. All are volunteers at the LZ Phoenix veterans homeless shelter in Waverly.

WAVERLY – A nonprofit volunteer-run shelter for homeless veterans is slowly building a reputation for itself in Bremer County.

Called LZ Phoenix, the four-bedroom house, located at 420 16th St NW a few blocks west of the Wartburg College campus, was established in 2015.

In that time, 32 veterans have successfully completed a program, with the assistance of veterans from other social service agencies, and found permanent housing.

“Which is extremely rare,” said Neal Jarnagin, director of veteran affairs for Bremer County. “The homeless population has a high rate of becoming homeless again, but not when they come to our program.

“There’s definitely a life we’re saving for every one of these veterans,” many of whom also may have mental health or chemical dependency issues, Jarnagin said.

Most stay in the Cedar Valley area. Veterans from across the state are accepted and one was originally from California.

The only thing the shelter provides is housing, Jarnagin said, and access to his office to secure benefits and services to them, ranging from therapy to food assistance to job placement services.

“We connect them with all these services, all these resources, all these individuals. Ideally they (shelter veterans) will connect with one of them. And if we’re all talking, all working for the benefit of the individual, it’s going to work out.”

Jarnagin initiated a nonprofit group, Rally Point Cedar Valley Veterans, to operate the shelter after county officials declined to take on the shelter as a county entity. Several veterans are involved in running and supporting the center or sit on the nonprofit’s board of directors. The house and site was acquired by the Waverly Homes senior housing organization and offered for possible shelter use.

Jarnagin got the idea after working several months to help a homeless veteran passing through the area who needed a place to stay until Jarnagin could obtain benefits on his behalf. “If there was no shelter I’d still be doing all this stuff,” Jarnigan said. “It’d just be, where are they going to lay their head at night?”

“The nonprofit serves anyone that served one day or more of active duty, and discharge status doesn’t matter,” Jarnagin said. “That includes active duty service members, veterans, National Guard and Reserves. We also accept their families and their pets.

“We are a mixed-gender shelter that is staffed 24 hours a day by volunteers,” Jarnagin said. “We do not charge our clients a dime to stay there.”

“Everyone, including myself, is not paid for their participation,” Jarnagin said. “In other words, we have a ton of people working on behalf of the veteran because it’s the right thing to do and not because they’re getting rich out of the deal.”

Board vice president Bob Sable, a U.S. Marine Corps Vietnam veteran, said he could relate to the situation some vets are facing.

“I was homeless for a while,” after returning from service. “I wasn’t homeless long, but long enough to know what it is. Neal asked me to be involved. And I guess I kind of felt for these guys too. And gals.”

Matt Haugan, who served with the Marines in Iraq, is board president.

The shelter has tended to serve older veterans, though veterans of any age or era are welcome, Jarnagin said.

“Typically it’s between 40 and 60,” Jarnagin said, though an Operation Iraqi Freedom veteran also has been helped.

“What I’ve noticed with the younger population is they take care of one another for a lot longer. They can couch-surf for a long, long time. You mention the word ‘shelter’ and they’re immediately turned off.”

Jacob Farran, a Marine veteran of Afghanistan, is a junior at the University of Northern Iowa, majoring in business, who also volunteers. “It seemed like a great cause. And being a veteran myself, I lost friend of mine from my unit to suicide last year. So just the opportunity to get involved with something like this and help people, help the veterans, I was really happy to get involved with it.”

LZ Phoenix has its own website and Facebook page. Jarnagin’s also reaching out to small veterans posts around the state for fundraising and also to make them aware of the shelter’s services.

Rally Point Cedar Valley Veterans is hosting a vendor fair event, “Raise the Roof for LZ Phoenix” 9 a.m. to 2 p.m. Nov. 18 at the Waverly Area Veterans Post, 1300 Fourth St. NW. Professional photos will be taken for a freewill donation and those interested can sign up by emailing katie.reints@gmail.com or just show up that day.

The group also is organizing a 1940s-themed black-tie “Christmas Gala” four-course dinner event at 5 p.m. Dec. 2 at the Waverly Area Veterans Post, including dancing with music by the Cedar Valley Big Band and a number of fundraising activities. Sponsorships are being sought. Tickets are $60 per person.